Nerves all gone: The Shell-Shock Diary of Private Clarence Booth 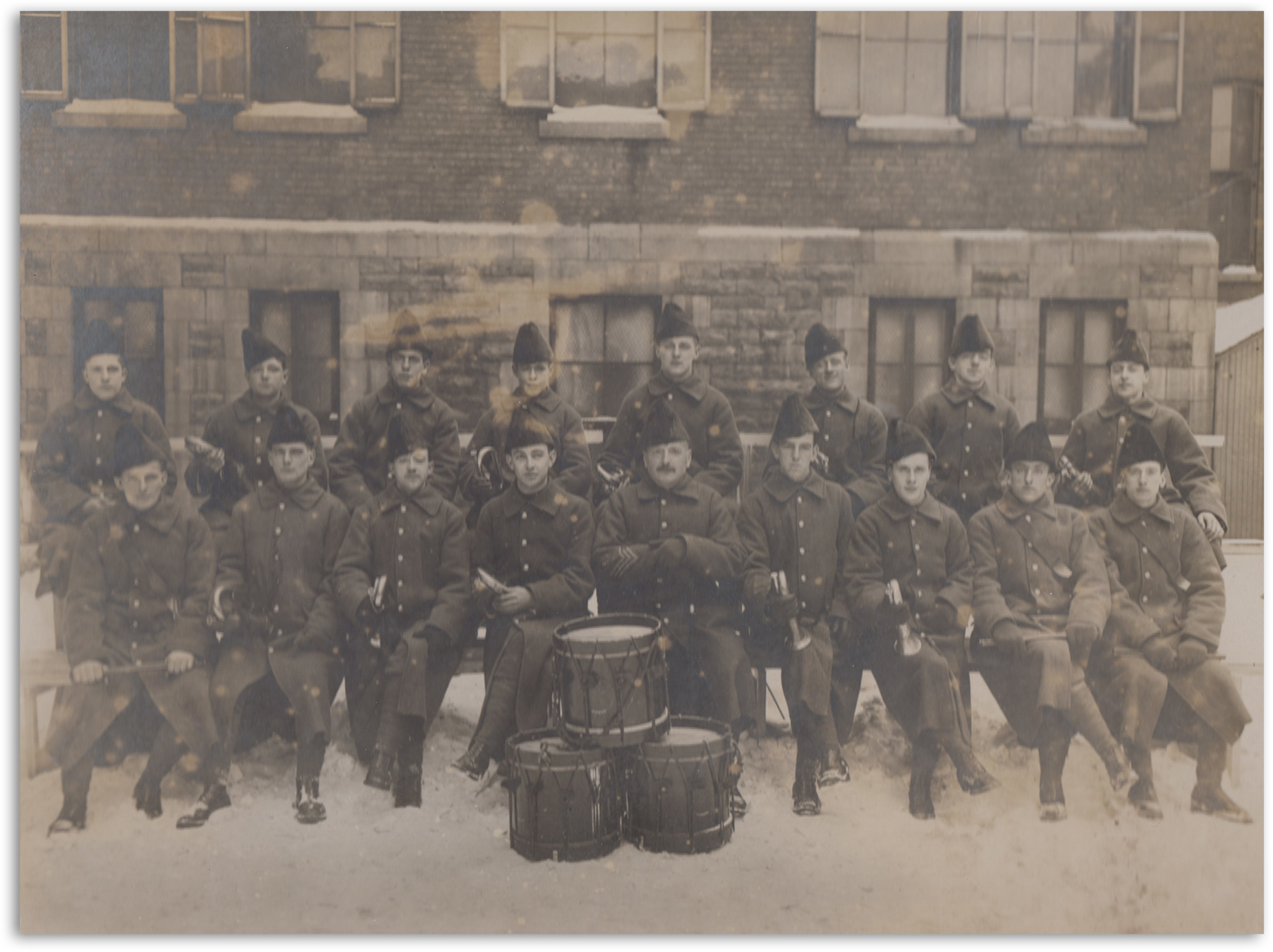 Clarence Booth, a drummer upon enlistment, is seated leftmost in the front row.

The Canadian Centre for the Great War

On 26 April 1916 shortly after the disastrous Battle of St. Eloi in Flanders, Private Clarence (Buster) Booth noted in his private diary “Nerves start going bad.”1 Booth, age 23 and part of the 24th Battalion (Victoria Rifles) had volunteered in his hometown of Montreal and served at the front since late 1915. By the spring of 1916 and after months of dreadful living conditions and days of German bombardment around the St. Eloi craters south of Ypres, Booth was suffering from that familiar First World War affliction: shell shock.

Shell shock, or neurasthenia as it was medically diagnosed, is one of the most potent social symbols of the First World War, along with trench warfare and extent poison gas. It afflicted a reported 15% of the Canadian Corps during the Great War, though the actual rate was likely much higher, and was treated with everything from electroshock therapy to talk therapy and isolation chambers.2 What we now call Post-traumatic Stress Disorder (PTSD), shell shock has been present in some form or another in every war and is a common feature of conflict, but it was during the First World War that it gained public prominence.

Initially thought to be a condition resulting from the physical effects of shell concussion, shell shock covered a variety of symptoms such as nightmares, general malaise, inability to sleep or eat, muteness, traumatic vision or hearing loss, unexplained loss of muscle control, and personality changes. Shell shock affected military personnel at all levels and was not limited to frontline soldiers; this wide range of victims led army psychiatrists like Dr. Clarence B. Farrar of the Canadian Corps to attempt to pinpoint what it was that made one person manifest shell shock and another not. Many of the diagnoses were the result of mental health stigmas of the time, proposing that it was the result of pre-existing “intellectual defective[ness]”, poor moral development, or class.3

Booth’s diary, with entries from his enlistment in 1914 until late 1916, is interesting because he notes his shell shock symptoms throughout this period. His descriptions are not at all like those found in some of the more literary representations of shell shock, written after the war by English writers Robert Graves and Siegfried Sassoon, that speak of nightmares of bodies on the floor under their beds and other dramatic visual hallucinations, but rather short and terse notations.4 “Went to Line. Got Lost somewhere almost walked into Enemy lines, shelled us hid in shell holes. A Night I will never forget in History” written on May 16. 1916, and “My nerves are going wrong […] Nerves all gone” written two days later.5 Indeed, by reading Booth’s description of his experience, readers see the slow degradation of a man under pressure as the horrors he witnesses and which occur to him accumulate.

Upon examination of Booth’s medical record from the same period, it becomes clear that he was in fact suffering from PTSD. Booth notes in his diary on 20 May 1916 that he “packed up to go to Hospital (shaking like a leaf)” where he was admitted and diagnosed as suffering from neurasthenia according to his clinical record.6 Following his diagnosis, Booth notes in his diary a stay in hospital, a brief return to the trenches and then another stay in hospital suffering from influenza according to his medical record.7 Nothing more is said about what kind of treatment he received but it was at a regular field hospital and did not require moving to a more specialised treatment centre in England, which is notable.

Dr. Farrar, in an article written for the American Journal of Psychiatry in 1917, notes that “In hospitals close behind the lines there is still an atmosphere of the front and a mental tone which comes from mass-suggestion of men striving shoulder to shoulder” and it was this atmosphere that would encourage recovery in those suffering from stress related fatigue.8 Looking at his medical record, it appears Booth fell under this category of treatment. After what he had seen and experienced at St Eloi and Mount Sorrel, also in Flanders, he needed time away and rest to recover. He was not considered incurable at the time and thus would have been returned to active duty as soon as possible. As can be imagined, returning soldiers suffering from PTSD to the frontlines, though viewed as necessary, resulted in many deaths. Current views hold that it is likely that many of those who were court martialed and shot for cowardice during the war were likely suffering from the prolonged effects of PTSD.

Booth’s case, however, is a happier story. After his third episode of shell shock the Assistant Director Medical Services at 4th Canadian Field Ambulance realised that he could not (and in all likelihood should not) return to active frontline duty. Instead, Booth was transferred to 2nd Divisional Headquarters in June 1916 and spent the rest of the war as a batman and as a cook in the General Headquarters kitchens. He attended courses to learn how to cook the fine food that GHQ required, including, according to his notes taken in 1917, lemon soufflé and seems to have spent his free time seeing the sights. His personal archive includes theatre tickets from performances in Paris and London, books of photographic postcards, and items from time apparently spent in Germany with the Army of the Occupation in 1919.

In the end the diary reveals Clarence Booth to have been a very lucky man. During a war where almost 1 out of 10 serving Canadians was killed and 175 000 suffered at least one injury, Booth left the war physically unscathed. Whether he continued to suffer from “bad nerves” as he called them remains unknown. Today his diary provides a first-hand account of a soldier suffering from shell-shock, providing valuable insight.

According to his official military record, Clarence A. Booth (65092) was born 27 February 1893 in Springfield, MA and at the time of enlistment lived in Montreal with his mother, working as a jeweller. He was not a tall man, of medium height, with blue eyes and fair hair. His record shows that he was living on Saint-Urbain Street with his mother at the time of enlistment, the property is now part of the Université du Québec à Montréal campus. Clarence Booth was demobilised in 1919; it is not known if he continued to work as a cook or returned to his original career as a jeweller. He died on 4 June 1961.

Farrar, Clarence B. “War and Neurosis: Some Observations of the Canadian Expeditionary Force” in The American Journal of Psychiatry, Vol. 73, Issue 4, April 1917, 693.

2. “Clarence A. Booth, 1903 Canadian Pattern Service Dress.” Collections CCGW/CCGG. Note the use of horn buttons which was permitted given the 24th Battalion's lineage as a rifle regiment. Also of interest are the 5 overseas service chevrons found on the right sleeve.

3. “Diary, Clarence A. Booth.” Collections CCGW/CCGG. Booth, like many soldiers, kept a diary of his wartime experiences.

4. “Recipe Book, 3rd Army School of Cookery.” Collections CCGW/CCGG Once he was transferred to the 2nd Division's HQ, Booth learned to cook. This notebook contains handwritten recipes which he would have variously prepared, including rabbit pie, souflé, and 19 different puddings.

5. “An Assortment of Souvenirs Collected During the War.” (c.1918-1919). Collections CCGW/CCGG Booth kept a significant amount of souvenirs and ephemera from the war. This photo contains 4 examples which are from after the Armistice. Proceeding clockwise from the top left: “15 Ansichten von Bonn” (“15 Views from Bonn”), a collection of unused postcards with photos of Bonn; A day pass from Christmas Day 1918 permitting Booth to travel from Bonn to Cologne; An invitation to a dance held in February 1919; “Bruxelles, 12 Cartes Postales” (“Brussels, 12 Postcards”), a collection of unused postcard depicting the city of Brussels.