The little we know about Allen Erastus Hager’s biography comes from his attestation papers when he enlisted in the 18th Battery, Canadian Field Artillery, in Regina in November 1914. He was born in Cooksville in Peel County, Ontario, on 3 February 1892, but his family moved to Saskatchewan, settling in Earl Grey. There, he worked as a teamster, driving teams of draft animals before he signed up for service at the age of twenty-two, listing his father, Wesley Hager, as his next of kin. Hager was of medium height, standing 173 cm tall, with grey eyes, dark hair, and a dark complexion. He indicated his religion as Wesleyan. Although he had no prior experience in the military or militia, Hager received the Military Medal for bravery during the Battle of the Somme in 1916.

His personal war diary is not about the Western Front, however, but about his involvement with the little-known Canadian Siberian Expeditionary Force late during the war. Tasked with intervening in the Russian Civil War, this military formation was the brainchild of the Imperial War Cabinet in London in July 1918. Specifically, Canada was one of thirteen nations to send troops to Vladivostok to fight Bolshevism and keep Russia in the fight against Germany. The diary begins with Hager’s arrival at Camp Witley in Surrey, England. He travelled by train to Dundee, Scotland, departing with his unit by ship to Arkhangelsk (Archangel) in northwestern Russia. From September 1918 to June 1919, as Hager details in a single-ledger diary, he served as a gunner and bombardier in skirmishes against Bolsheviks. Personality wise, Hager appears aggressive and soldier-like, taking pride in battling Russian forces. He views the Siberian Expedition as a just and worthwhile cause unlike James S. Patrick, another diarist who served there, providing a critical counter.

Hager’s notebook of forty-five pages has a leather cover embossed with the words “The Kelvin Electrical Note Book.” Hager wrote his entries in black ink on the recto of each page. As March turned into June 1919, his entries became terse recordings of the troops’ manoeuvers. However, he survived the ordeal and returned to Canada, his unit demobilizing on 18 July 1919.

Hager’s diary is at the Canadian War Museum Library and Archives. 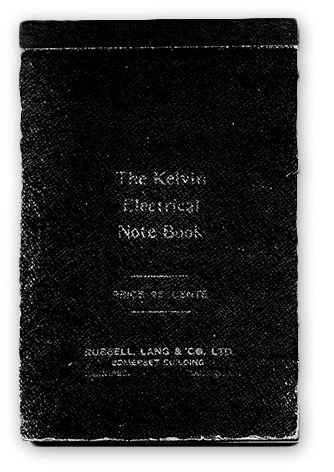 Personnel Records of the First World War - CEF 370543b. Library and Archives Canada.